The following talk was given at ‘The Prayer Academy”, Cartsbridge Church on December 19th 2018.

At the beginning of the year the Moible phone giant, Samsung, launched a very clever tagline for its Galaxy mobile phones:

The company wants customers to realise that “Do What You Can’t” is what they do every day. They want it to be more than just a marketing slogan.

This tagline has strong resonance in a truly Christian way of life. Two weeks ago we eavesdropped on the apostle Paul as he prayed for the Ephesians:

“I pray that out of his glorious riches he may strengthen you with power through his Spirit in your inner being, so that Christ may dwell in your hearts through faith.”

It’s the constant emphasis of the New Testament, that strength for the Christian life comes by the personal indwelling of the Holy Spirit. The presence of the Holy Spirit in our lives is evidence that we are truly the children of God (Romans 8:9).

Flowing out of that it is the power of the Spirit in our lives that enables us to serve Christ in the world.

“You will receive power when the Holy Spirit comes on you; and you will be my witness in Jerusalem , and in all Judea and Samaria, and to the ends of the earth” (Acts 1:8).

In other words, to ‘do what you can’t’ in your own strength and resources achieve. That reality is brought into even sharper focus with the doxology that we will reflect on tonight.

In verses 20–21 Paul’s heart is soaring in prayer, and he closes this first half of his letter with a magnificent expression of praise.

It’s a remarkably bold request. Having been incredibly bold to ask what he did for the Ephesians he goes on to affirm that God can actually do far more than he asks.

God’s ability is powerfully demonstrated by Paul in a blended expression which has seven stages:

When you scan different translations of the Bible you will find expressions like, “immeasurably more,” “vastly more than more,” “infinitely more.”

This verse states simply that there are no limits to what God can do.

Such a God can answer prayer.

The infinite ability of God to work beyond our prayers, thoughts and dreams is, “…according to his power that is at work within us…” He works in us individually (Christ dwelling in our hearts by faith) and within us as a people (who are the dwelling place of God by his Spirit). It is the power of the resurrection, the power which raised Jesus from the dead, enthroned him in the heavenly places, and then raised and enthroned us with him. This is the power which is at work within the Christian and the church (Eph. 1:15ff)

The Bible is full of statements about glorifying God. Our sole purpose, our basic reason for existence is to bring maximum glory to God. Scripture virtually pulsates with the mandate, “Glorify God!”

“May the God who gives endurance and encouragement give you a spirit of unity among yourselves as you follow Christ Jesus, so that with one heart and mouth you may glorify the God and Father of our Lord Jesus Christ.”

When we study the Scriptures we find that glory is used in two major ways.

First of all, glory refers to light, the light of God’s presence, a bright shining light from heaven. This expression of the glory of God appears in Exodus 40:34 where we read, “the glory of the Lord filled the tabernacle.” The light was so awesome that no one could approach this place. The glory of God is the beauty and brightness of his character.

But when it comes to the primary goal of the church to bring glory to God, we are not talking about the brilliant light of God’s presence, his absolute perfection. We are referring to our calling as a church to magnify, exalt or elevate the Lord as we humble ourselves and submit to his wisdom and his authority.

Let me try and illustrate this in the following way. When the church declares before the world the words, “Glory to God,” it’s like the Manchester City team lifting their coach on their shoulders having just won the league; or like a standing ovation you would give to a band or an orchestra after an amazing performance. That is what this doxology, this expression of praise to God is like.

We are lifting God up to the world and saying there’s no one else like him.

Let me be clear. There is in the heart of every child, teenager and adult the need and longing to sing a doxology. We may sing it with greater energy to athletes or rock stars than we do to God. But there is no denying that the doxology is there in every heart. We were made to worship and sing.  We were made to have a hero to brag about, namely, God. The is the most basic impulse in the human heart. And so the reality of doxology is just as common and understandable if you take your seat at a stadium or a theatre or if you take your seat in a church or cathedral.

The experience of having your heart soar in admiration to God depends on whether you have ears to hear and eyes to see that above and behind every admirable thing on earth stands the magnificence and beauty of God.

Paul’s admiration for God was overflowing. And so at the end of these three chapters he sings a doxology.

How do we understand that? Well again, let us try and look at it from this angle: To Frances McDormand & Gary Oldman be glory in the Oscars, to Bruno Mars be glory in the Grammys, to Mohammad Salah be glory in Anfield but to God be glory in the church. Go back to verse 10 for a second to see how Paul imagines the church as the theatre of the glory of God: “(God’s) intent was that now, through the church, the manifold wisdom of God might now be made known to the principalities and powers in the heavenly places…”

The reason God created the world and called the church into being is so that he would have a sufficiently diversified yet unified system of mirrors with which to reflect the glory of his many-sided wisdom to the universe. Cartsbridge is a local expression of this universal church. Our goal, therefore, is to be a corporate and visible and audible doxology to God.

3. “To him be glory in the church and in Christ Jesus…”

If the church is the theatre in which the principalities and powers of the universe are to see the glory of God’s manifold wisdom, then Jesus Christ is the embodiment of that wisdom and the main character in the drama played out in the theatre of the church. The way the church glorifies God is by simply providing a venue in which the work of Jesus Christ can take effect. Ministries like Alpha, King’s Club, Impact, tlc, etc. are opportunities to display God’s glory to the outside world.

4. “To him be glory in the church and in Christ Jesus to all generations for ever and ever. Amen.”

The greatest men and women are only shooting stars in the night sky. They, like we, last for a couple of seconds and then are gone. But God is like the sun. And generation after generation he rises on the just and the unjust and never fades in his glory. “To him be glory in the church and in Christ Jesus to ALL GENERATIONS, FOR EVER AND EVER. Amen.”

…in all of history…through out all of eternity…To him be glory!

There is a phenomenon in hillwalking called a brocken spectre. It can appear on any misty mountainside or cloud bank. A brocken spectre is the magnified shadow of a hillwalker cast on clouds opposite of the sun’s direction. The person’s head is surrounded by halo-like rings of coloured light. It looks like an iconic saint’s halo. And the name given to those rings is a glory. 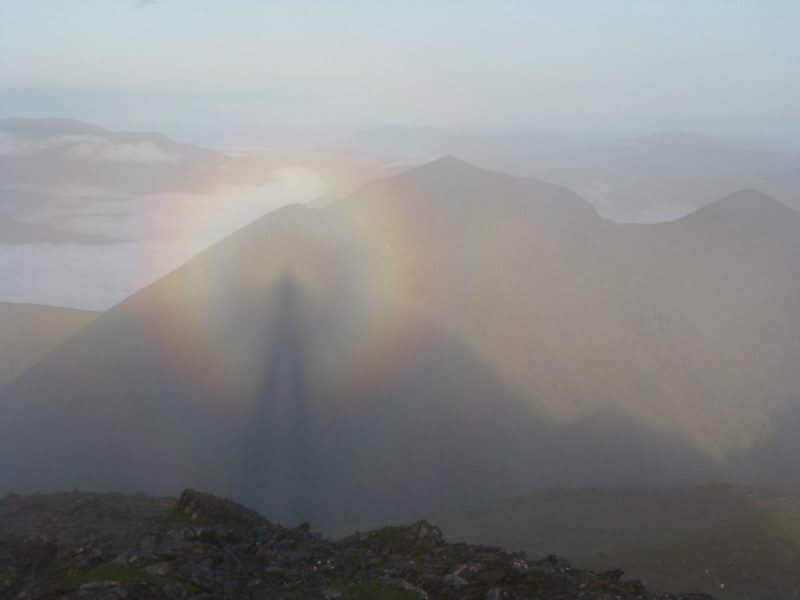 God will be forever glorified. Nothing in time and eternity will change this reality. Having said that, it is the calling of the church to reveal his glory, to display his glory to the world around us. “And we, who with unveiled faces all reflect the Lord’s glory, are being transformed into his likeness with ever-increasing glory, which comes from the Lord, who is the Spirit.”

James, in his New Testament letter, says: “You do not have, because you do not ask God” (James 4:2). May that be never said of Cartsbridge Church.

Cartsbridge Evangelical Church is growing and active church on the south side of Glasgow. This blog is designed to chart the story of collective prayer within the fellowship. View all posts by theprayeracademy